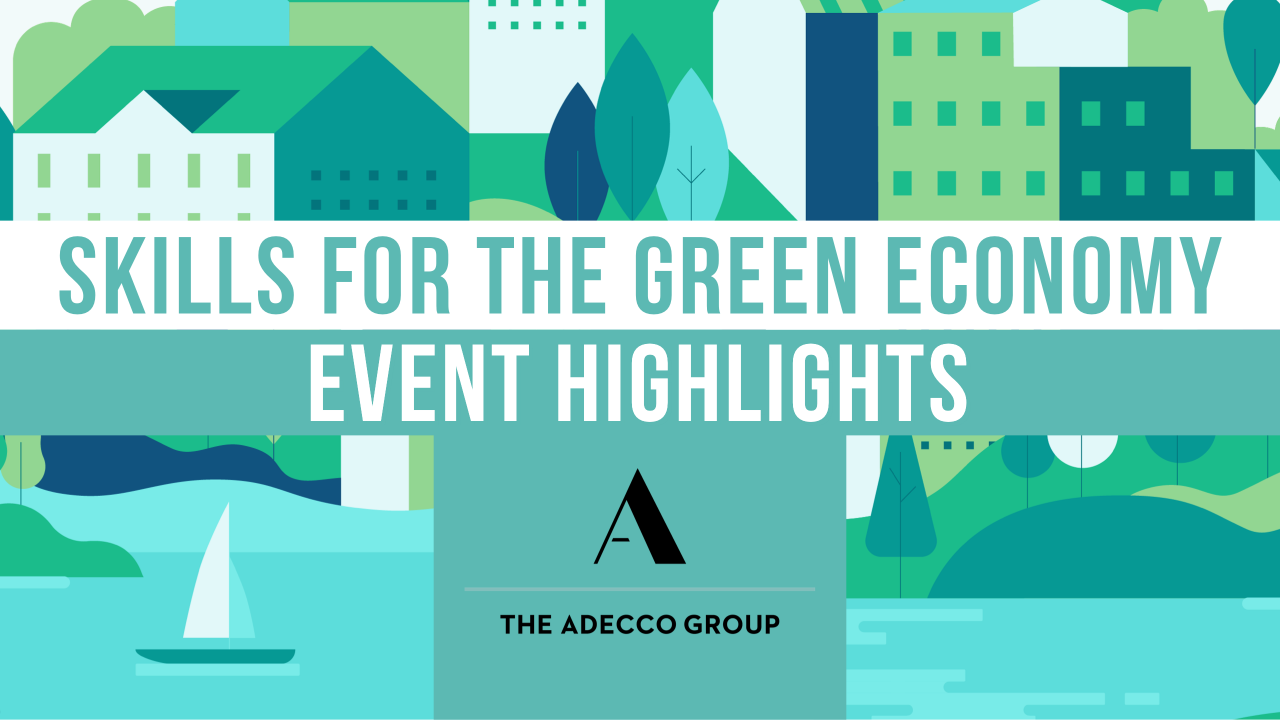 The impact of climate change on society and labour markets globally will be profound. To ensure an effective transition to a green economy, climate change mitigation policies are being implemented worldwide, setting ambitious goals that will require unique measures to be introduced by governments, national, regional and local authorities, social partners, civil society and industry.

Moving towards a greener economy will create new opportunities, clean and sustainable technologies, and investments that will require new skills and new jobs to transform climate and environmental challenges into real growth.

To this end, The Adecco Group held a high-level online discussion on 14 April, on the crucial role that skills investment needs to play in transitioning toward a Green Economy. The event explored key insights from the White Paper Skills for the Green Economy, illustrating how investing in the right skills is an essential condition to achieving the urgently needed Green Transition, and outlining the actions that can and should be taken to mitigate negative impacts on labour markets.

Mr Benifei explained that the European Skills Agenda for Sustainable Competitiveness, Social Fairness and Resilience, presented by the Commission in July 2020, is a positive first step. Alongside its 12 actions to be achieved within the next five years, the initiative also explicitly refers to gender gaps and the integration of European youth in the labour market.

Mr Benifei highlighted that at least 30% of Next Generation EU funds will be dedicated to the green transition, which will bring together green ambitions with a social agenda, and with occupational objectives in particular.

Ms. Riondino outlined the European Commission's ambitious goals for Employment Policy in the coming years, underlining how the Green Deal has become the growth strategy of the EU, setting a clear path for transition interlinked with the Pillar of Social Rights - the implementation for which the Commission recently adopted an action plan.

Ms Riondino noted that although "the transition to a sustainable Europe with a circular, low-carbon economy will have positive effects on growth, employment and well-being, the transition is not inclusive by default. A Just transition requires decisive policy action, ranging from stimulating investments, including in retraining and up-skilling of the workforce, to accompanying labour market transitions and mobility, and incentivising changes of behaviours and mind-sets".

Ms Riondino highlighted that, according to estimates, the transition to a low-carbon economy will create:

These will be especially in the fields of building renovation, energy, transports, waste management, as well as sustainable finance.

Ms Riondino underscored that there is an unprecedented amount of funding available at EU level through the Recovery and Resilience Facility as well as the Social Fund, the Horizon Europe programme, the Just Transition Fund and the European Regional Development Fund, as well as support for training and education through the Erasmus+ programme. Ms Riondino stated that "It is really crucial that the Member States make use of these to promote the investments and the reforms that we need to make the most of the green transition".

Mr Huitema stated that the automotive industry is an example of how facing great challenges in connection with both the digital and green transitions can bring an industry to the forefront of innovation. For this, however, new skills are needed, particularly given that the automotive industry accounts for approximately 6.7% of EU jobs, directly and indirectly, as well as 11.5% of EU manufacturing jobs, Mr Huitema highlighted.

Mr Huitema noted that the rapid pace of transformation means that the industry needs to adapt quickly, but the concern is that a portfolio of skills suitable for companies both large and small is needed. Mr Huitema underlined the importance of continuous adjustment, life-long learning and the role of schools and educational organisations.

Ms Maydell represents the EPP in the European Parliament with an agenda of promoting innovation, sustainable investments and access to qualified education. Ms Maydell noted that, given the increasing role that data and AI will play across economic sectors, a strong link with industry is needed.

Ms Reiter underlined that in order to realise the opportunities of the green economy, all participants in the green transition need to be proactive - from governments to employers and individuals. Ms Reiter highlighted that approximately:

Mr Bart highlighted, in closing, the importance of connecting green objectives with social objectives, making sure that citizens are included in the green transition process, as well as keeping Europe competitive on the global scale.

With the aim of re-/up-skilling 5 million workers by 2030, The Adecco Group stated that investing in skills and employability, and ensuring proper career guidance are key not only for the green transition, but also the digital transition and the pandemic recovery.

What's next on the new EU Green Deal