Teaming for Excellence – a sustainability crash-test for Horizon Europe

The context and the call

Teaming for Excellence (TfE) is a leading action of Horizon Europe under the objective of building up Research and Innovation (R&I) capacities in countries with reduced R&I performance to enable them to advance to the competitive edge at European and international level. These so called widening countries currently comprise Bulgaria, Croatia, Cyprus, Czechia, Estonia, Greece, Hungary, Latvia, Lithuania, Malta, Poland, Portugal, Romania, Slovakia and Slovenia. The list also includes the outermost regions of France and Spain, and may comprise associated countries once association agreements are completed.

Introduced in Horizon 2020 and conceived as a "stairway to excellence", the TfE scheme provides generous funding for flagship projects that establish and/or reinforce Centres of Excellence (CoE) in widening regions through R&I partnerships between regional research actors and international leading universities and research centres. Over their typically five to six-year duration, selected TfE projects receive up to €15 million from Horizon for developing the CoE and recruiting scientific, technical and administrative personnel. A small part of this support can be used to initiate R&I activity. Co-funding of a similar amount should be secured to cover expenses relating to infrastructure from other regional or national sources that in most cases come from Structural Funds for the implementation of national or regional Smart Specialisation Strategies.

A TfE project deals with the implementation of the full business plan for a CoE presented in the TfE proposal. The evaluation criteria for TfE proposals in this two-stage competition refer mainly to the concept and overall design, the socio-economic outreach and the realism of the investment plan, including the degree to which the necessary co-funding during TfE implementation is already secured. Other key points in the evaluation are the proposed plans for the CoE to ascertain its continuous commitment to excellence, as well as itsautonomy in decision-making, notably in legal, administrative, operational, personnel and academic matters. These are crucial factors for attracting and keeping talented highly qualified professionals in the widening regions.

Through two rounds of calls in Horizon 2020, one in 2016/17 and one in 2018/19, the European Commission selected a total of 25 projects in 11 widening countries, with non-coordinating partners (comprising the "excellent" institutions from non-widening countries and other relevant organisations in widening countries) coming from 23 EU Member States/associated countries. The first call launched under Horizon Europe in September 2021 received 120 applications, of which 20 have been invited to participate to the second stage later this year. Given the budget earmarked for this call, another 10-12 CoEs should be expected to start in 2023. A new round will be launched in the 2023-2024 Horizon Europe Work Programme.

The European Commission published an impact report in January 2022 on Horizon 2020 actions for widening countries, including TfE. According to this report, ongoing TfE projects have already had a positive effect on scientific excellence in widening countries, linked to new international activities and R&I collaborations and demonstrated by increased numbers of publications in high impact journals and new research topics. Such positive effects were more pronounced than other related actions, essentially due to the longer duration and much more substantial support provided by the TfE scheme.

Ongoing TfE projects also claim to have managed to attract new research funding. The most common sources reported are income acquired through competitive funding at national or European level, and agreements with industrial partners. However, at a time when many of these projects have gone through a major part of their implementation, only approximately 50% of CoEs claim to be able to generate sufficient revenue without European Commission and national committed funds; for 40%, this would not yet be possible.

Post-project sustainability is a major goal for Horizon projects, especially from the European Commission perspective. In most cases, this may relate to advances in science and technology, increased R&I skills, stronger cooperation across the EU, follow-up research and knowledge spill-overs that may lead to significant longer-term effects, even in cases where exploitation plans for new products or services fail, or proposed roadmaps, networks or cooperation schemes are not pursued when European Commission funding stops. While TfE projects would certainly produce such benefits, if CoEs were to discontinue their operation in the post-TfE period – as may be the case for a meaningful share of ongoing projects, according to the impact report – there would be more immediate problems to deal with, including terminating employment contracts of qualified personnel and having to find new ways of using specialised and expensive R&I infrastructure. This means that longer-term sustainability is much more crucial for TfE than for other Horizon projects.

Key issues and ideas for next steps

The projects of the TfE scheme must comply with three main requirements:

Looking at the rich experience of creating CoEs in EU Member States, this may correspond to a "trilemma situation", as in many cases it would be possible to meet only two of these requirements simultaneously. For example, securing financial resources for scientific excellence might mean having to comply with requirements imposed by funders that restrict autonomy in decision making. There are also cases where vital research skills are directed towards obtaining funding, which can negatively affect the quality of the scientific work produced.

As mentioned, the funding sources for CoEs created by TfE in the post-project period may essentially come from a combination of competitive projects procured at national or EU level and framework agreements with industrial partners. Securing longer-term sustainability from just these two sources after only five to six years of operation, part of which being devoted to getting started, might be a serious challenge even for prestigious R&I institutions in non-widening countries, as the ones that offer their know-how in the TfE projects. It should be stressed that good practice examples in Sweden, the Netherlands and Austria, among others, show that CoEs can generate sufficient levels of own revenue only after successive periods of public support, which in most cases nonetheless remains a supplementary but vital resource.

In view of this, it might be necessary for the European Commission and the widening countries to develop complementary schemes to increase the sustainability potential of CoEs coming from TfE. These could include performance-based funding schemes. For example, access to further financial support could be obtained for an additional period, subject to the CoE meeting targets related to scientific production and cooperation with industrial and other economic development actors. Moreover, increased attention of widening countries to the sustainable development of the CoEs could be included as an item in the new European Research Area policy agenda, together with actions for experience sharing and mutual learning, leading to universal adoption of the more efficient support measures.

The message for current TfE projects, as well as for future TfE candidates, is that, while securing co-funding for developing the CoE is a major task, post-project sustainability may prove to be a crucial challenge, requiring careful planning during the project design and close follow-up during implementation. Important choices have to be made relating to the concept of the CoE, the choice of partners to involve and the strategy to follow for the exploitation of R&I, to ensure a clear focus on the longer-term operation of the CoE and, therefore, the overall success of the endeavour.

How can we help? 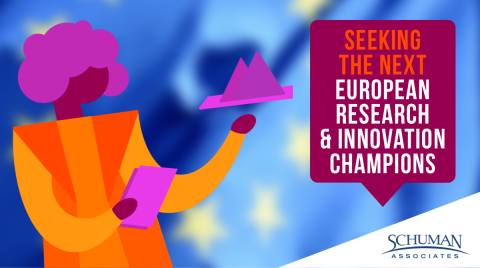 Schuman Associates has followed these issues closely since the beginning of the TfE scheme. We invite interested parties, including existing TfE projects and those at a planning stage, to get in touch to discuss how we can support you and the success of your Centre of Excellence.
Get in touch
Facebook Twitter LinkedIn Pinterest
Tags:
Research and Innovation Centres of Excellence Teaming for Excellence Horizon Europe
Delivering the Digital Transformation through the ...
Green investments to benefit from more flexible fu...