Batteries remain an important part of the EU´s industrial as well as environmental policy. Commission Vice-President Maroš Šefčovic stated: "Batteries are at the heart of the industrial revolution and I am convinced that Europe has what it takes to become the world's leader in innovation, decarbonisation and digitisation."

In April 2019 the Commission completed its evaluation of the Batteries Directive of 2006, which is the only piece of EU legislation that is entirely dedicated to batteries.
The evaluation showed, that the directive has at least partially succeeded in meeting its objectives, to minimise the negative impact of batteries and waste batteries on the environment by reducing the presence of hazardous components in batteries and establishing measures to ensure the proper management of waste batteries.

To advance further the objectives of the Batteries Directive, the European Battery Alliance was launched in 2017. The goal of the Alliance is the establishment of a full value chain of batteries in Europe, with large-scale battery cells production, and circular economy, at its core. Significant progress has been made to advance this goal with numerous projects of the private sector under way and the Commission´s Strategic Action Plan on Batteries of 2018 already under implementation.

Furthermore as part of the European Batteries Alliance, the European Technology and Innovation Platform on Batteries was launched in June 2019 with the goal of becoming a the driver of the R&I ecosystem for batteries in Europe. In October 2019 the European Technology and Innovation Platform on Batteries elected its first governing board, consisting of representatives from research institutes and the batteries industry.
In addition to the Strategic Action Plan on Batteries, the European Commission also created the European Strategic Energy Technology Plan (SET Plan) to advance the transition towards a climate neutral energy system through the development of low-carbon technologies in a fast and cost-competitive way.
Boosting the EU´s competitiveness in the global battery sector was set as part of the key action areas of the SET Plan. One of the initiatives created to achieve this goal is the project "BATTERY 2030+", a large-scale and long-term European research initiative, funded by Horizon 2020. "BATTERY 2030+" is currently developing a roadmap to achieve ultra-high performance batteries with smart functionalities, which are safe, low-cost, scalable, durable and predictable with a long lifetime. The roadmap will be presented to the European Commission in February 2020.
The growth potential of the batteries market in Europe is enormous. According to some forecasts, Europe could capture a battery market of up to €250 billion a year from 2025 onwards. Covering the EU demand alone will require at least 10 to 20 'gigafactories' or large-scale battery cell production facilities.
There are numerous EU funding opportunities available and more being planned for the 2021-2017 period.

The upcoming months will be crucial for the future of the European batteries and there is a lot on the agenda for both policy makers and industry leaders. 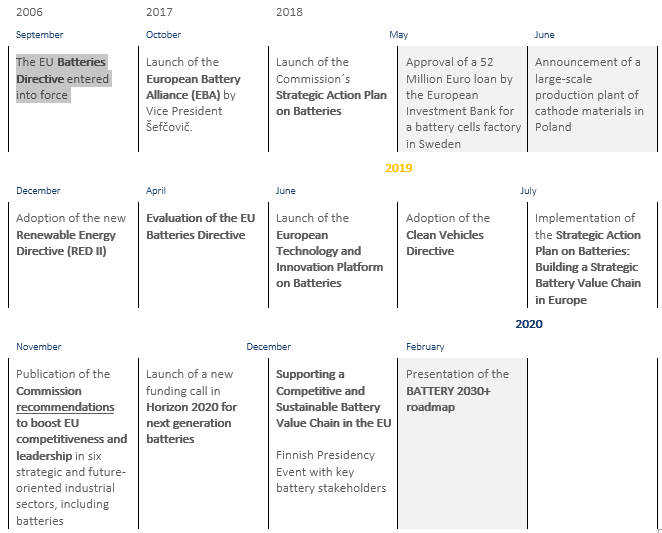 ​If you want to learn more do not hesitate to get in touch with our Public Affairs team in Brussels: This email address is being protected from spambots. You need JavaScript enabled to view it.