​President-elect Ursula von der Leyen presented her team and the new structure of the next European Commission. The new Commissioners will be in charge of making decisions on key EU strategies and policies, propose laws, funding programmes and annual budgets for discussion and adoption by Parliament and the Council. Moreover, they will be in charge of the different EU funding programmes including Horizon Europe, European Structural and Investment Funds and EU External Aid funding instruments.

Who will be responsible for Research and Science spending?

Gabriel will take over management of the €94.1 BEUR allocated to Horizon Europe, the EU's largest ever research programme. According to the "mission letter" addressed to Gabriel by von der Leyen, during the next five years her role is to:

According to an article published by Science and Business "the appointment of a commissioner from Eastern Europe has a broader symbolic purpose. The EU-13's participation in Brussels research programmes remains at a low level. From 2007 to 2013, the poorer countries got 4.2 per cent of all Framework funding; from 2014 to mid-2018, it was 4.8 per cent. These countries account for about 10 per cent of all Horizon 2020 applications, but their success rate is 11.8 per cent, compared to 14.9 per cent in the EU-15".​

Short profile:
Mariya Gabriel is responsible for digital economy and society in outgoing Commission. Was an MEP from 2009 to 2017. Was a teacher and a researcher at Sciences Po Bordeaux. She holds a Master in Comparative Politics and International Relations Academy for Political Science, Bordeaux, France.

​Who will be responsible for ESIF spending?

Europe's cohesion policy has a tangible impact on the lives of millions of Europeans. Investment in local communities and infrastructure helps regions to catch up and reduces geographical disparities. Ferreira will be in charge of the portfolio that will make it possible to ensure the conclusion of negotiations for the next multiannual financial framework and will also manage Structural and Investment Funds. In total she will take over the management of €373 BEUR proposed for future Cohesion Policy.

According to the "mission letter" addressed to Ferreira by von der Leyen, during the next five years her role is to:

She is Economist. Deputy governor of the Bank of Portugal. Ferreira has also held two ministerial positions in Portugal, serving as Minister of Environment (1995-1999) and as Minister for Planning (1999-2001). She served three terms as an MEP for the Socialists & Democrats (S&D). She is the first Portuguese woman to be put forward as commissioner.​

Who will be responsible for External Aid spending?

Urpilainen will be in charge of the newly proposed 89.5 BEUR Neighbourhood Development International Cooperation Instrument (NDICI) – a new funding instrument which merges most of the current geographic and thematic instruments into a single one designed to increase the effectiveness and visibility of the EU external policies.

According to the "mission letter" addressed to Urpilainen by von der Leyen, during the next five years her role is to:

Urpilainen will work under the guidance of the High Representative/Vice-President Josep Borrell (Spain) and will be supported by The Directorate-General for International Cooperation and Development (DG DEVCO).

Short profile:
Jutta Urpilainen is a former finance minister and ex-leader of the Social Democrats in Finland. Also Finland's first female commissioner. She studied to become a school principal, but decided politics was a better fit. Known for her tough line demanding collateral in exchange for bailouts during the eurozone crisis. Crowned Europe's "fourth best finance minister" in 2012.​
Olivér Várhelyi​, Neighbourhood and Enlargement (Hungary)

Várhelyi will be in charge of the continuation of the IPA instrument – the proposed 14.5 BEUR Instrument for Pre-accession (IPA III) which will support EU candidate countries and potential candidates on their path to fulfilling the accession criteria. Additionally he will also oversee the relations with the EU neighbours (Eastern Partnership and Neighbourhood South – which will receive 22 BEUR funding under the NDICI instrument).

According to the "mission letter" addressed to Várhelyi von der Leyen, during the next five years his role is to:

On Western Balkans and Turkey:

On Neighbourhood South:
Várhelyi​ will work under the guidance of the High Representative/Vice-President Josep Borrell (Spain) and will be supported by the Directorate-General for Neighbourhood and Enlargement Negotiations (DG NEAR).

Short profile:
From 2008 to 2001 he briefly served as head of unit at the European Commission, in charge of industrial property rights at the Directorate General Internal Market and Services. He then moved back to the Hungarian foreign service, service from 2011 onward as deputy head and then from 2015 head of the Permanent Representation in Brussels, with the rank of ambassador extraordinary and plenipotentiary.

Lenarčič will be in charge of the proposed 11 BEUR Humanitarian Aid Instrument which will provide EU assistance to save and preserve lives, prevent and alleviate human suffering, and safeguard the integrity and dignity of populations affected by natural disasters or man-made crises in Europe and around the world.

According to the "mission letter" addressed to Lenarčič by von der Leyen, during the next five years his role is to:
Lenarčič will work under the guidance of the High Representative/Vice-President Josep Borrell (Spain) and will be supported by the Directorate-General for European Civil Protection and Humanitarian Aid Operations (DG ECHO)

Short profile:
Janez Lenarčič served as ambassador to the OSCE, director of the OSCE's Office for Democratic Institutions and Human Rights, secretary of Slovenia's permanent U.N. mission, and the PM's diplomatic adviser. 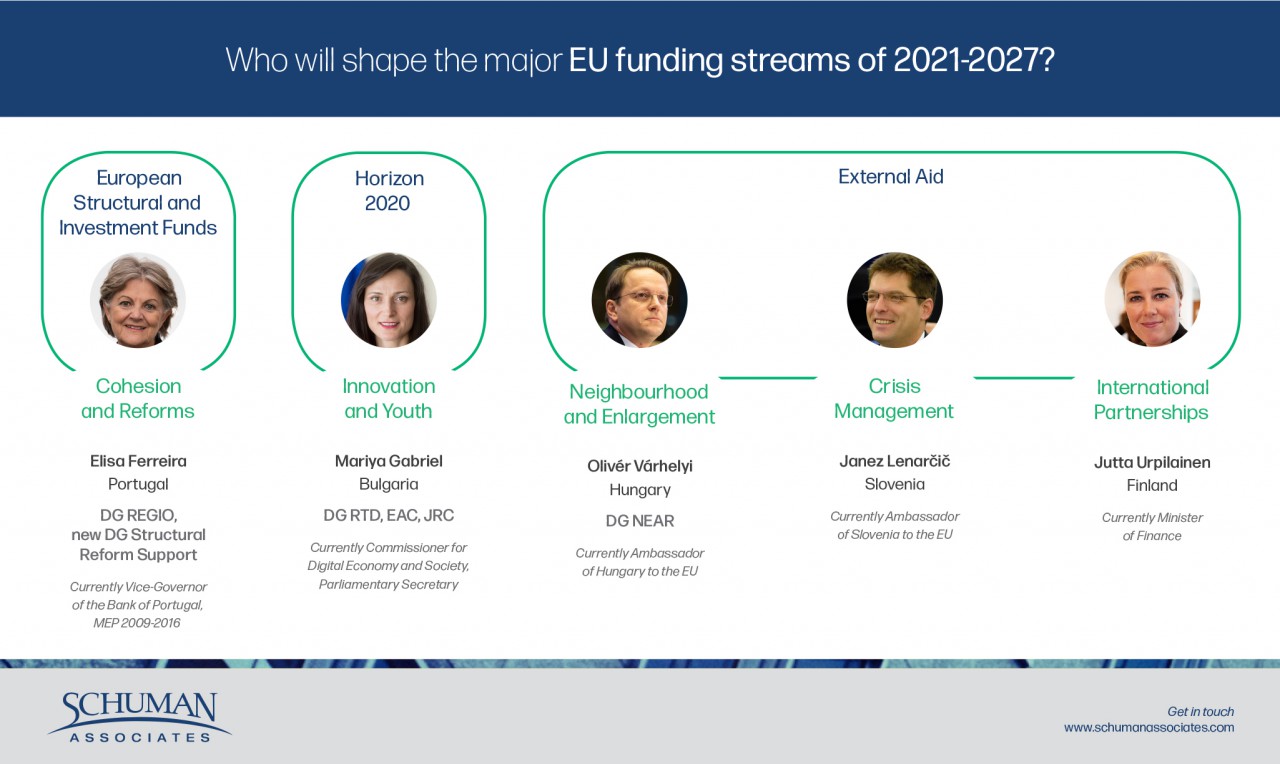 If you want to learn more about future EU funds do not hesitate to get in touch with us: This email address is being protected from spambots. You need JavaScript enabled to view it.
Facebook Twitter LinkedIn Pinterest
Tags:
EU Commission Commissioners funding Funds
What's next on the new EU Green Deal
Will your business benefit from the next round of ...